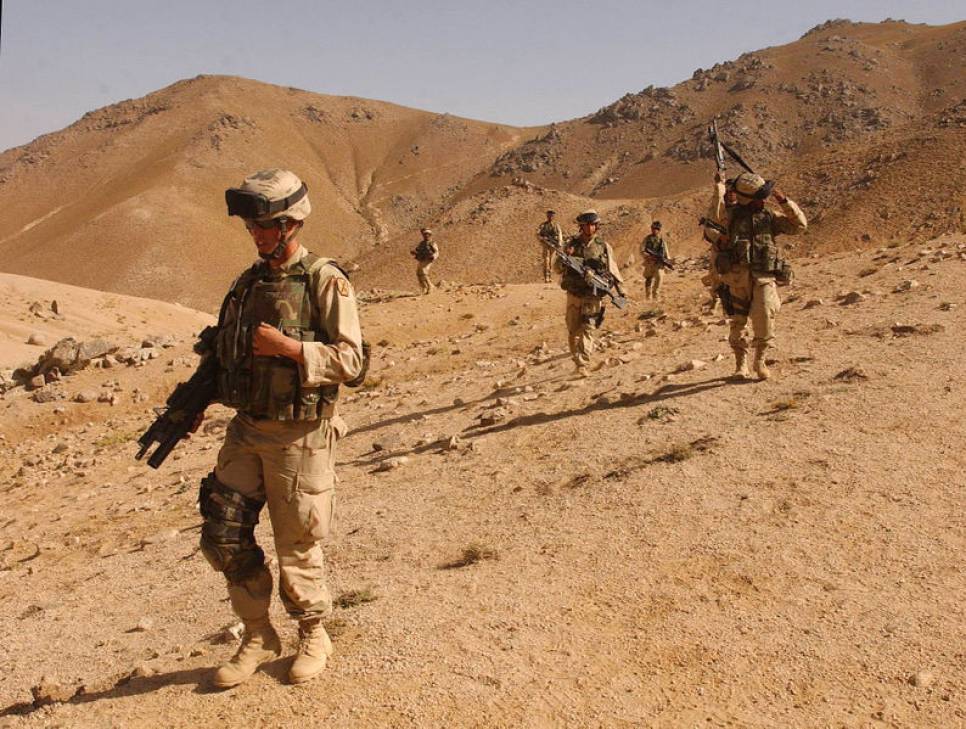 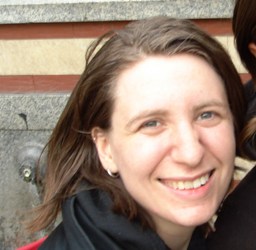 From the moment I saw the documentary Myths for Profit: Canada’s Role in Industries of War and Peace, at RIDM (Rencontres internationales du documentaire de Montréal) I knew I wanted to interview the producer and learn a more about this amazing story that impacted my journalist’s psyche. I walked around the RIDM press room to check if any newspaper had written anything about this Canadian documentary, but I had no luck: articles were focused on films related to human rights abuse in Colombia, India, Iran or somewhere else. Myths for profit were displayed only twice during the ten days of the festival. As far as I knew, it did not have any impact in the local newspaper, despite the fact that Montreal media was dealing at that moment with a huge scandal regarding the Canadian responsibility for detainee abuse in Afghanistan.

This paradoxical situation made me wonder more about Miller’s denouncement concerning Canada’s role in war. Amy M. Miller is a Canadian writer, producer, director with a background in popular education and organizing within social movements. She found documentary filmmaking as a way to mix art and agitation. In addition, she is involved in numerous media projects, including reporting for Free Speech Radio News, Groundwire, The Dominion, and the Independent Media Centre- Montréal. Her documentary Myths for Profit is a dramatic exposé documentary which explores Canada’s role in Industries of War and Peace.

Through diverse interviews and case studies this documentary unveils the specific interests and profits that are made by certain corporations, individuals and agencies within Canada. By examining these myths she seeks to find out what are the possible motives that hide behind these stories, and if there are certain people who stand to gain and maintain these misconceptions. Amy believes that only by breaking down these myths can we hope to understand how these systems of power operate, and help empower people across Canada to change them.

Miller based her documentary on three myths, the first one, Canada is a peacekeeping nation, examines the changes in the Department of National Defense since 1999 and takes a serious look at the role Canada has taken in NATO. A particular focus is given to the current perpetual war in Afghanistan, how Canada assisted in the illegal coup d’état in Haiti, and how Canada played a pivotal role in pushing the policy of “bombing for humanitarian aid” in Yugoslavia.

The second myth, Canada’s policies on Reconstruction and Redevelopment are helping people around the world, investigates how various government agencies and ministries have specific agendas they are implemented around the world. From the Department of Foreign Affairs (DFAIT) to Export Development Canada, policies are being designed and carried out to ensure a free market neo-liberal agenda in different countries, regardless of the negative effect they may have on the communities and environment they impact.

And the third myth refers to Canada’s military purpose is defense. By investigating the magnitude of the Canadian military’s industrial complexity, from the mining of uranium used for depleted uranium weapons to the production of components in weapons systems, this section probes the intersecting relationships between various government agencies and corporations as well as public complicity in this vast industry. 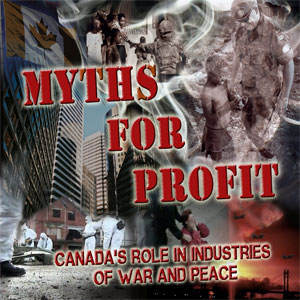 Finding Amy Miller was easier than I have guessed. I could not contact her at the RIDM closing event, I finally met her at café L’escalier, a cozy place in downtown Montreal, where I could confirm not only the social commitment that Amy has, but also her courage to show the world another face of her own country. She has strength to make a very serious and professional investigation, and her craving of justice that feeds her adventurous spirit to travel anywhere, to get proof and testimonies to bear her stories.

N.G. How long did it take to make this documentary?

Amy Miller: I started working in January 2009 and my first interviews were in May 2007. At the end of that month I went to Europe where I recorded a lot, and I came back in Canada in July 2008 to film the Canadian section which I finished in September, so all the documentary was done by March 2009. From start to finish the total time was two years and two months… And if I would have gotten more money, I would have done a littler bit more.

N.G. How did you come up with the idea of including animation to explain NATO’S interference through history?

Amy Miller: Eric Hanson was the animator who did that part; we worked together on the story board of the animation. For me it was like asking myself “how do you explain what NATO means without people getting bored?” I don’t have a back ground as a film maker, I just learned as I went, so I was wondering how to include this fraction. I saw as many political documentaries as I could for several years to see how people make it, and then I though: “ok that is a technique I want to use or not, that doesn’t work for me”… And then I said “wait a minute I can take all that large concepts, and make it into an animation”, and that is how I did create the NATO section.

N.G. Were you aware of the effect that this controversial documentary could generate?

Amy Miller: I think there is always deep keeping in industries. I never thought my documentary was polemical, but people has told me that it is polemical, how is it being? I don’t necessarily think the establish documentary world is going to open its hands because it has a political agenda. I don’t try to be objective or neutral, you know? I try to be very direct in the documentary. This exists and we have to look at that, so a journalist can say let’s investigate this. It is not a point of view; it doesn’t have a character which is more what a Canadian and Quebec traditional documentaries are all about. It is not something that everybody is waiting to say: oh this is amazing!. I never had the intention of going that route that is why when my documentary was done, I had a nine week cross Canadian tour booked and set up. I went to visit different peace groups across the country, and we organized presentations and we showed it in 45 communities across the country.

N.G. How has it been the public acceptance?

Amy Miller: I met small communities like Peterborough where over a hundred people were at the screening, and in cities like Toronto or Montreal is too much going on that you might miss a good experience, but the screening at the north territories were attending by hundred an thirty people and to me that is amazing, great!. We did the Q&A, and also we left a lot of information at the tables and the peace groups joined the event, we were the event, the entertained and then we talked about and it, and it was incredible.

After doing the tour I realized that there is a huge age division going on with social and peace movements. You have a lot of people who are 40 plus that are completely cut of from youth and vice versa. So the documentary was a way to bring all these people in the room , and a lot of educators told me that they wanted to use it in the classroom, make people think about this issues and look at them and see all the misconceptions that we have been told. From the general public, from the communities sector, and peace groups my documentary has been very well received.

As a matter of fact, some militaries have seen it now and I got a lot of feedback. I have been told that they don’t feel like a formal attack to soldiers or individuals rather the military and the structure and that is really encouraging because these individuals are watching it and having a discussion with their friends, and that is a huge entry point, it is not a door being closed… They don’t feel like no I don’t want to go there, instead they say wait a minute let’s think about this…

N.G. What do you think about the Canadian scandal in Afghanistan?

Amy Miller: It is a portfolio that they are refusing to make a comment to the media they refuse to talk about it. The Human Rights Watch is showing what is the total cost to transferring detainees point A to B in Afghanistan, and oh! It has been a completely “no comment”. So, if they have nothing to hide they could have been transparent, and that looks like it has been up for years; and we see that they finally know things, so why is that surprising? I mean, Canadians for some reason we really take confidence in the idea that is going to be a very clean war and there is nothing dirty involved but “war is war”. 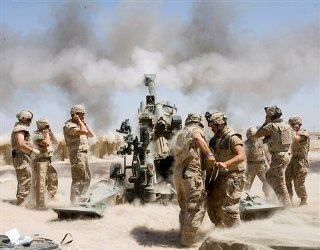 Question is how can we get into a point that we can even conceptualize war in such of terms that stipulates a clean way? Right? How is that we have more articles about Tim Hurton’s opening in Kabul when we have soldiers and we don’t know the day to day operations? What I find very interesting in Afghanistan is that Canadian forces are going to be pulling out in 2011 and yet Canada is going to be very involved in the reconstruction team. There is a lot of insinuating that Canadian companies will be hired on… Is it going to be Garda, one of the biggest security companies in Canada right now? What is the relationship?

N.G. What was your big concern after projecting the film?

Amy Miller: I interviewed over fifty people for my documentary, and I cut a lot of sections, I could not include the entire section about mining uranium and was hard to do it because it is such as important link for Canada. It is exported to the States, turned into weapons and then imported back to Canada to use it by the Canadian military forces. That is happening right now; this has been used in Afghanistan and all over the Balkans.

There were other sections about Haiti and Congo that are not in the documentary, because you can’t do everything. We made a lot of interviews and it was hard to make it work. Besides this, I know that all this information is new for some people, they actually do not have a real regard of our country. Canada has high rates of education and for me it’s like why do we not question more at all? We just take things like they say it is, and it is ok.

N.G. Has your documentary being rejected?

Most people don’t do the distributions but we do. We got copies, the documentary exists, people are watching the demo and ordering the copies. Soon it will be in French too, and this is exciting, it is a lot of work to do.

N.G. What are your future projects?

Amy Miller: I am looking forward to producing a documentary about the process of agro-business around the world, no one is looking at it; and I want to explore that.

I bet Amy Miller has more than one project in her mind; meanwhile her political documentary is a brilliant way to wake up the collective consciousness in Canada.

Myths for Profit: Canada’s role in Industries of War and Peace

Special thanks to Amy Miller.