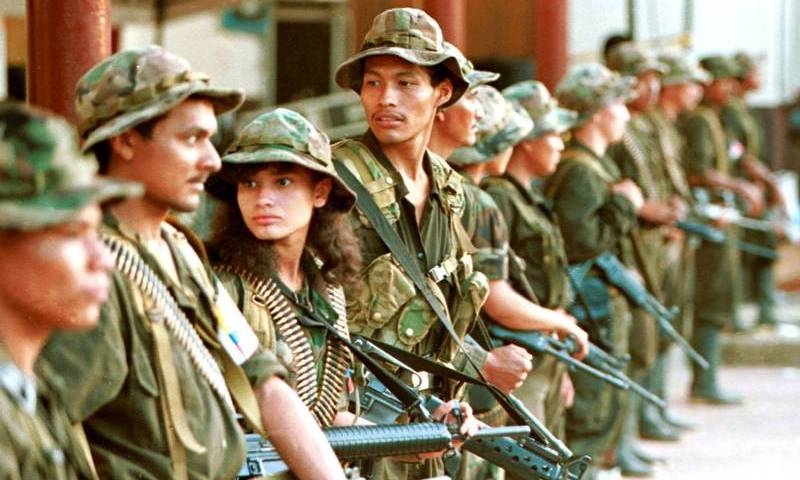 “It was something I could not refuse” said the journalist Natalia Gnecco, when asked about the offer that her Swiss-Colombian friend Ines Marchand made to her. She was the director of “Agape for Colombia,” an organization that between 2007 and 2010 worked for the reconciliation between victims of the Colombian armed conflict and the children who were recruited as members of the war by various groups.

Natalia’s mother was a member of the Legion of Mary, a Catholic organization from Ireland that promotes social justice and protection for the most vulnerable. “As a child I would go to the poor towns of Colombia with her,” said Natalia. They would bring food to the hungry, clothes and medicine to the sick. As a consequence, Natalia developed a strong feeling of love and compassion for the victims of the social conflicts in Colombia.” She always looked forward to working for the United Nations and do more for the less fortunate in the world. In 2004 she was able to work in the UN’s administrative sector and met many philanthropists that participated in various interesting programs designed to help the victims of violence.

In 2006 Natalia moved to Canada and met Miss Marchand through a common friend, and when she explained to Natalia what “Agape for Colombia” did for the children who were victims of the Colombian armed conflict, a strong bond developed. The mission of Agape for Colombia consisted in bringing children who had been members of the guerrillas in Colombia to Canada, a neutral country and letting them live for a month with a Colombian family that had come to North America to seek refuge from the war. Natalia’s mission consisted of convincing the Colombian families living in Canada to accept the children in their homes, which was not an easy decision to make for the families, for many of the children had participated in criminal activities such as: kidnapping, murder, extortion and rape. However, many families still accepted the children for they understood that they were also victims of the war, and vulnerable citizens that the Colombian state had not been strong enough to protect from the illegal groups that recruited them.

After all the arrangements were made, the arrival day came and Natalia, along with the Agape for Colombia team went to the airport to wait for the children who did not know that they would be staying with Colombian families. Soon, the Air Canada flight that transported the children was announced at the Trudeau airport and the excitement was big. The kids arrived and felt shocked when they saw the Colombian group that was waiting for them.

At first, everyone was silent.“The kids were not capable of looking at us in the eyes, said Natalia,” and I tried to break the ice by asking them simple questions about their flight.” The next day the ambassador of Colombia hosted a dinner in his Montreal residence for them and as the days passed the trust and bonds of friendship were strengthened. One night during a campfire some kids finally opened up their hearts and told the group their stories. A girl named Diana, told the group that she was only 7 years old when the troops of a revolutionary group went to her small town and took away the children of every peasant to make them join the guerrilla. If the kids ever tried to escape they would be shot, so it was a risk trying to do so. Diana was able to find freedom, because she was shot during a combat with the Colombian Army and the member of the revolutionary group decided to leave her behind, because they thought she was going to die. The Colombian army found her, took her to the hospital and helped her reintegrate to the civil society. Another girl called Lucy, told us that she fought a lot with her mom, because she did not want to follow the basic rules at home and she also hated her stepfather, so she saw joining the rebel group as a way of escape. However, after a month she wanted to escape, but was not be allowed to do so. She was a witness of torture, kidnappings, rapes, drug dealing and assassination. Many of her fellow comrades were killed during combat with the Colombian army, which made her make the decision of escaping after 10 years in the jungle. Another kid called Rene, told us that he had a fascination for weapons and decided to join the guerrilla to handle them and feel powerful. He soon regretted his decision, like many people who felt a fascination for war and decided to enlist thinking they would find honour and glory. At the end of the night they apologized to the families of victims who hosted them and they all hugged each other. It was a clear proof that the healing was taking place.

“We are surprised there are not many police officers on the streets of Canada” was one of the most common comments of the children when asked what their opinion of Canada was. It was the first time they had traveled away from Colombia and they were impressed by the Canadian peaceful environment. They also enjoyed the trades programs they were put in to help them acquire job skills during their time in the country. They particularly enjoyed bakery and carpentry.

Natalia tells us that “the most positive part of this program” is that it brought long term consequences. The family that hosted Rene for a month still talk to him and have been a great influence on his life, and is working as a teacher at the moment and giving conferences to the most vulnerable to prevent illegal recruitment. Lucy and Diana are now working in “Panaca,” Colombia’s famous and touristic national coffee park and feel grateful to Canada for helping them find the true peace, the one that comes from within the heart.

BEYOND YES OR NO