January 27, 2023
Trending Now
Home Política Marcel Dzama: A rebel with a cause. 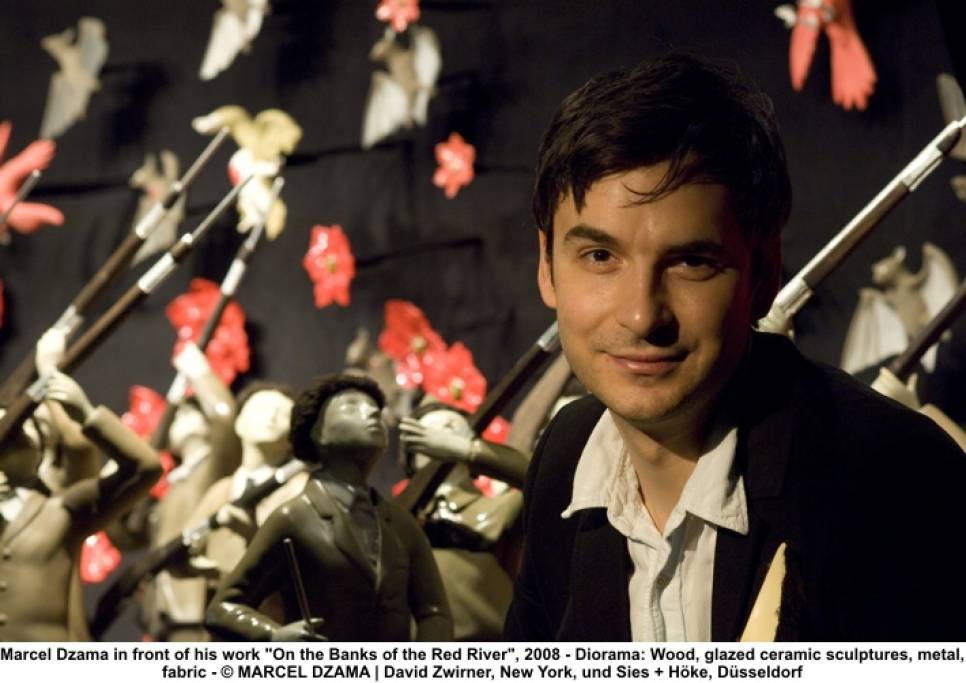 The Contemporary Museum of Arts of Montreal (MACM) always surprises me with something fresh and creative that seduces my journalistic imagination. I went to discover another Canadian talent who happens to express his art not only through drawings, sculptures videos, collages and dioramas, but also with a high dose of a political point of view.

The multidisciplinary Canadian artist Marcel Dzama was born in Winnipeg in 1974. He has been living and working in New York since 2004, and received his BFA from the University of Manitoba, we can see in his work the perfect balance between the human figures, animals, and imaginary hybrids to life, a touch that has developed his international reputation as unclassifiable art. Best known for his elaborate ink and watercolor drawings, I met him at MACM and we walked together around the exhibition for a couple of minutes where I asked him some questions about his magnificent work. I have to confess that I have run into a very sensitive soul that knows very well how to replicate moments of his life through the language of art.

Undoubtedly, his diorama wood, glazed ceramic, sculpture and metallic work called “On the Banks of the Red River” makes us freak-out immediately, because this immense piece of art symbolizes the human being as the greates natural predator that exists on the planet. And if we look at the shotguns, dead bodies, animals and the stand up gunmen inside this huge image, they are assorted with the insatiable, mercenary, rationalized and deceived human mind that sometimes uses the most effective weapon of persuasion and deceit; the speech and the same knowledge of the human conduct and ignorance of the individual one.

Dzama told me that his father loved World War II movies and he used to spend hours watching them, imaging many situations and behaviors of the human beings. As a matter of fact, guns are not an unknown issue for him; since he was born at the eastern end of the Canadian prairies where it is common pace for Manitobans to go haunting.

In fact, bats and bears are animals that are very alive in Dzama’s art work,. He explained to me that his hunting t areas are extremely remote and have one of the largest concentrations of big black bears in Manitoba, a province known for trophy and colored bears. After he said this I felt like if I were traveling miles away from Montreal to another land which is also in Canada, giving me the dream of traveling there just to smell the air and expirience the natural world that inspired this young Canadian artist.

The curator, Mark Lancot also eulogizes the talent of this contemporary artist: “Dzama transforms seemingly arbitrary imagery, steeped in nostalgia, into a sort of mythology that is aesthetically attractive (the works are beautiful) while precluding most straightforward readings. He mixes and cooks up ingredients into something well beyond the sum of its parts, an imaginary world suspended between present and past personal and mythical, site and non-site”.

Despite the pieces full of nostalgia, and memories of his dear Manitoba, Dzama manipulates the human body. It seems like anatomy is part of his creation and he could not avoid laughing when he timidly assured me that he wanted to become a doctor when he was a child, and that is why he pays too much attention to human movements, because he studied the human figure very hard. For me, he is extremely good at drawing bodies, I would say “obsessively good” . I mean that in a possitive way. because I did enjoyed recognizing women movements and expressions in every single detail I of his watercolor drawings.

Marcel told me that he started drawing when he was at elementary school and he added: “ I made my own comic books and then I started painting in high school. At that time I also played the guitar and I used to make drawings for the covers for the cassettes tapes of my music” One of the drawings that called my attention was “Quand on a un corps étranger entre les jambs” because it is a different way to represent a women having a baby in a middle of a multitude and the new born seems to be a creature that doesn’t look like his progenitors.

Dzama said very seriously: “My wife and I were expecting a baby and I was wondering how this new baby would be, how this unknown littler person would look like. At one point my son was like a foreign person living in my wife’s womb so I decided to include all this in my drawings”. As a matter of fact, Marcel also said that it took him three years to do the entire exhibition devoted to Canadian artist at the MACM. 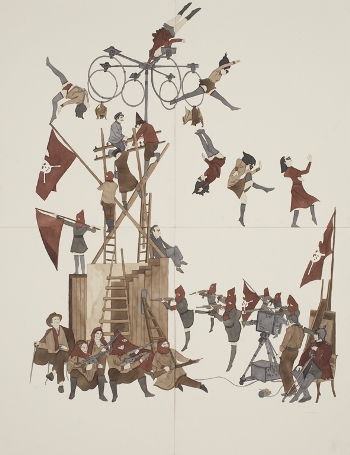 As I said, Marcel Dzama seems to be a very sensitive person, his works shows us an artist very committed to the reality and the world’s dark side that always threaten us. One of the dancers he represented shows the delicate movements of her body, but at the same time reminds us the cruelty of violence. In the same image, up in the skies we can see the dark clouds that come out from a bomb explosion, while the beautiful woman dances.

In fact, Dzama is not afraid to represent the dead, the violence, and the suicide. The unbelievable reality of his drawings that symbolizes for example the most recent Afghanistan war or the Guantanamo’s abuses something that President Bush once dared to call “an absurd report”. Marcel added: “I wanted to complain for the Bush Era and all the abuses that we witnessed since 2001”.

The suicide attacks by al-Qaeda upon the United States; or the report about the conditions at the US military’s prison at Guantanamo Bay are only an example of how our reality influences Dzama and he always finds a way to express his inconformity. We can perceive that in many of his works, like “In Room Full of Liars” (2007); “Justice and Revenge is Done” (2207); ” The 1919 Revolution” (2009); “Your country is Shit”(2009); “Forgotten terrorist 9″, Forgotten Terrorist 13”, “Forgotten Terrorist 15” (2009), etc. And to be sure that the message is clear, he adds phrases and expressions in different languages such as Spanish, words that he picked up from his travels to Madrid.

All characters that Dzama immortalizes with his drawings, paintings or sculptures demonstrate that the talent of this Canadian artist comes from a real source of inspiration and he just dares to fantasize with an oniric universe to elucidate the sinister side of the world outside.

Marcel Dzama: A rebel with a cause.