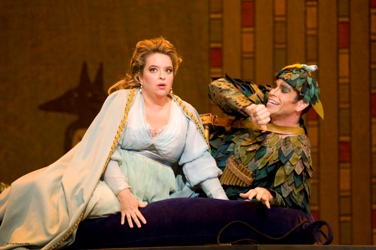 Montreal cultural activities never end. I was very happy to attend during this fall The Magic Flute Opera and also to explore two great exhibitions at the Montreal Museum of Fine Arts (MBA) and, the Contemporary Art Museum of Montreal (MACM).

The Magic Flute is an opera in two acts composed in 1791 by Wolfang Amadeus Mozart. The work is in the form of a Singspiel, a popular form that included both singing and spoken dialogue. I admired very much the voices, the clothes, the stage design, the music and the magic of the characters who gave life to the enchanted flute, a love story with a happy end.

I was also delighted to discover the Canadian soprano, Karina Gauvin who played the role of Pamina in this Opera. She is one of Canada’s most important artists; she has an exceptional musical talent, a beautiful voice and has won many prestigious awards not only in Canada but also around the world.

At the end, I could not avoid leaving the theater with a melody in my lips… well I was just imitating without much success, the powerful voice of Armenian-Canadian soprano, Aline Kutan she was amazing in her interpretation of the Queen mother who conspires by the supposed happiness of her daughter Pamina. I believe when she took the stage at Salle Wilfrid-Pelletier we were all overwhelmed to hear such as sung dialogues.

For all who missed this, the Opera season (2009-2010) continues, so do not forget to visit the Web site www.operademontreal.com.

The museum of contemporary art of Montreal always surprises us with something new, fresh, and unusual. I had the opportunity to meet Tricia Middleton a young artist who believes in herself, her instincts and her natural inspirations. She told me she became obsessive with mountains probably because she was born in Vancouver, so she adores the concept of “green” and that is why her work shows us the power of a healthy environment.

I walked around her exhibition and I decided to lay down for a few minutes in a special room that Tricia designed. The bed and the pillows were on the floor, all surrender by weird materials, just to create an atmosphere of complete relaxation. Up in the ceiling of this room she projected a film that showed stars in movements. It is like we could contemplate the sky from our room every night… Well the sensation was awesome! 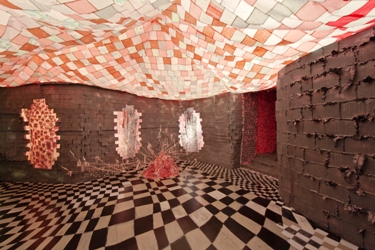 Tricia Middlenton was born in Vancouver and lives in Montreal since 2002. According to the curator, Sandra Grant Marchand, Tricia “investigates the process of creating a work, in installations that borrow from the disciplines of sculpture, video and painting. For Middleton, the material itself is the subject of the work. Often site-specific, her pieces bring together the studio, which she views as a kind of “absurd laboratory,” and the exhibition space, ultimately making them one and the same”

Don’t miss this fantastic exhibition that will be hold until January 2010 at MACM. www.macm.org

I am definitively a very romantic person, for that reason I believe that I liked so much to see the superb work art of Waterhouse, the gentleness of his paintings, his mysterious way to explore each color that shows the deep admiration that he had for women and his brilliant immersion in Greek mythology, a subject that really captivates me. I had the opportunity to visit each millimeter of Waterhouse’s exhibition with special earphones that played the music of the Montreal Symphony Orchestra (OSM) and the combination was astonishing: Kent Nagano and Waterhouse… Who wants to come back to work?

As a matter of fact, Peter Trippi, the curator of this exhibition affirms that Waterhouse’s paintings have survived to speak for him, and together they reveal a man who felt very deeply. Coursing through the pictures, across five decades, are Waterhouse’s fascination with melancholy, magic, and the thrilling dangers of love and beauty. Several contemporary observers called his pictures poetic, not only because they are scenes imagined from poetry, but also because they are lyrical in the truest sense of the word – imbued with the same hypnotic power possessed by the ancient poets who sang their stories. This was also a man particularly enthralled with female beauty and the power of women over men, over nature; over each other – no matter how sturdy or fragile they might appear physically”.

Doubtlessly the series of paintings of Lady of Shalott enchant all the spectators, is incredible the effort that the MBA has made to offer us this treasure, that according to Trippi locks up so many historical meanings. “This subject touch on a range of serious and troubling issues, including female sexuality, gender politics, the relationship of the artist to society, as well as a ferocious contemporary aesthetic debate around naturalism and narrative”

If you want to learn more about Waterhouse’s exhibition, you can visit it at the MBA until February 7 2010.