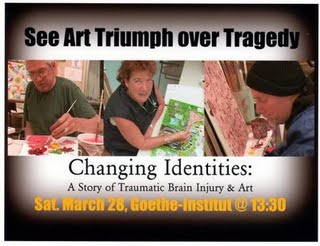 I was at the closing cocktail party of the 27th International Festival of Films on Art (FIFA) in Montreal, when I first met American director Dan Labbato and his wife Christina. This magnificent festival presented 280 films from over 30 countries, and to be honest, I not only missed a bunch of great films, but also I couldn’t stand the idea of writing about the same award winning films of 2009, like everybody else. Producers, directors, distributors, broadcasters, photographers, journalists were there talking about the Festival when I was suddenly engaged in a friendly chat with a couple from New York. We ended up asking each other why we were there. I was glad my black & white squares boots were trendy enough to catch Dan Labbato’s attention, so I dug up a little bit deeper into his documentary Changing Identities, a Story of Traumatic Injury and Art. I was fascinated… I finally I had gotten the answer to my journalistic dilemma.

As you might know, FIFA is a competitive ten-day event in Montreal, devoted to the promotion and presentation of the world’s finest productions of films on art and media arts. And despite of the fact that Labbato’s Changing Identities didn’t get a prize, and that I was seduced by productions such as “Michelangniolo: self-portrait” or “Titon de la Havane a Guantanamera”, I decided to rescue this amazing documentary for the benefit of all my readers.

Changing Identities chronicles the lives of individuals suffering from traumatic injury and their participation in an innovative method of recovery pioneered by artist Bill Richards. As Labbato assures, “each year, approximately 1.5 million Americans suffer traumatic brain or spinal injury, and while current health therapies leave many indefinitely institutionalized, Changing Identities explores a powerful alternative, under the voice of the Oscar winning Best- Actress Meryl Streep”. 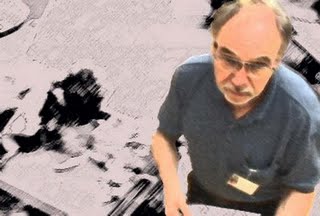 I reached Labbato in New York to talk about his story of triumph over tragedy, and here is what he told me.

N.G. How did you meet Bill Richards?

Dan Labbato: I met Bill Richards during an art exhibition at SUNY, State University of New York. I was contacted by an art professor who knew that I worked on documentaries at channel 13/ WNET and he was concerned about the exposition, because the art work that the program was putting out was so high level, so good, that you could not tell that this work has been done by people with disabilities.

They were worry that nobody was going to understand the conditions the art was made under. Thus they propositioned me to do a film that was supposed to be exhibited later that year, just to show the environment the paintings were made. I did it for no money, just nine minutes video and while I was making that video I met Richards along with the other people who were there.

N.G. You spent three years doing this documentary. How did you come up with the idea?

Dan Labbato: I was looking at philosophy: how can we understand our own identity? Is our identity always stable? Or it is just a sign that points to the person? Because it is not a real reason why you call me Dan, for instance… you know that was might have been guidance because of your parents, but there is not a reason of why I call myself Dan. I was working with these ideas by themselves, not in conjunction with this documentary. 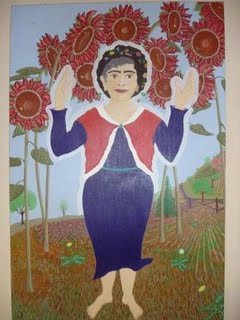 N.G. What about mixing art and science?

Dan Labbato: It is my feeling that what we see and what we represent in an image is more powerful for our mind than words. We can integrate the meaning of an image faster than we can do with words. It is very easy to cry when you are watching a film image is more naïve to our minds than words are, even though language is very important to us, and this can be argued of course. However, I am a visual person, so when I saw these people creating art work and trying to redefine their identities, it seemed to me that there was something so important about creating images, which goes directly to our identity, because we feel better when we are able to show our thoughts in a painting. Besides, identity is changeable because they are going from the identity of being disabled to the identity of being an artist, and contributing to society. We are able to create an image that reflects itself in some way, and that is why I combine this idea of science and art.

N.G. How did you manage to pick up these four characters: Garner, Miethner, Tusay and Blank?

Dan Labbato: They were already in the program for one or two years, and they have developed a style; they were really masters at what they were doing, especially Tusay. Nevertheless, the problem was that Tusay’s brain injury meant that couldn’t speak. Blank died after my first interview with him. Miethner didn’t really have a brain injury, so he couldn’t speak about the experience however he had to paint with his mouth. There was not body who could really tell me the whole story. I couldn’t film them starting from the beginning of the process because they were already there for several years.

N.G Then, how did you remake the story?

Dan Labbato: What happened was that Pat Gardner was admitted and then I got in contact with her, almost from the beginning and even though she had a brain injury from a car accident, she could express herself very well, so she could still be emotional and tell me what was going on.

N.G. Was that easy to cope with her?

Dan Labbato: I decided to follow Pat, who started from a very basic level and she would say at the beginning “I don’t want to do art, at all” and she was just doing circles, and then she said “I did it!” When I started filming her, she was at her first painting, and that was a very controversial picture, I didn’t want to publicize that in the film, but you could see it in some of the shots. I didn’t want to push her too much, I wanted to follow her progress, and in the end she went from nothing-meaning not wanting to paint to paint it all day and night. She painted and painted–never stopped, just to sleep or eat. I believe the only way to be good in this world by practicing. 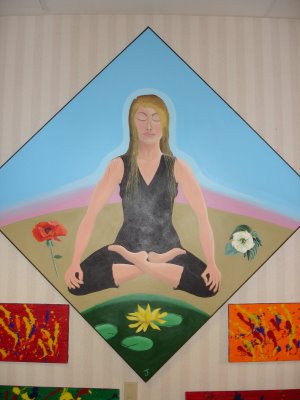 N.G Do you think that New Yorkers are aware of this type of treatment that Richards leads?

Dan Labbato: It is very controversial, because you have to go to school to study art therapy, and it costs a lot of money. This concept changed a lot, because Art Therapy used to be a part of psychology and they used it more like psychoanalyzing. What this means is your doctor asks you a question, he then will interpret what you say. They call that “talk therapy”, which is more about subconscious. Art Therapy based on talk therapy is done in this way: draw me a picture and then I will interpret it.

Dan Labbato: That was the old fashion way to do it. Now they are encouraging people the same way Bill Richard does it. It is not psychology, it is pure creation, it is only about just being an artist and what you can express, there is no a Talk Therapy. It is just you sitting down and expressing yourself.

N.G. Did you get any reactions from the public?

Dan Labbato: I got a lot of heat from arts therapists who saw the film in New York because it was threatening to them. You don’t need to pay anyone to do what Richards is saying just start painting everyday and you will find some benefit. In my documentary we never say, “Don’t do Art Therapy or psychology,” but people sent me emails complaining that I did say it. People see what they want to see, this is a different approach, and this is what the film is about.

N.G. You worked as a cameraman, editor, and director. What do you like most?

Dan Labbato: Well I was trained as a photographer, I love photography. I spent my time in Colorado, working in the movies where I was a 35 mm motion picture camera assistant. I was part of very large projects, movies of the week, high-end commercials, things that are very specific in a 35mm film, so I got to see how they do all the process and that is how I learned to write scripts too. In addition, I always worked as the editor.

N.G. So, you knew all the process?

Dan Labbato: Yes. I knew all the pieces of production and the post production, and then when the computer editing system came, I got into television editing. The only reason I did all those things on Changing Identities is because I had to. I didn’t have a budget to pay all those people. I would have loved to hire more people, because it was hard for me to be everybody, which is something I will not recommend. And I wouldn’t want to do it again, only if I have to.

N.G. What about shooting? 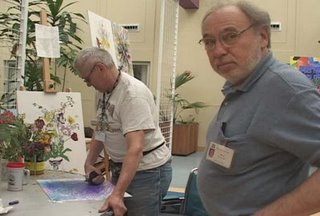 Dan Labbato: Because I knew the best light to use, for example, and getting a good picture doing the interview, I was able to have the best light I could possible have, and then I knew the camera. All I had to do was focus on asking the questions and really listening to what people were saying. When you are shooting and you do all these things together, it is very difficult.

Dan Labbato: I believe filmmaking is a collaborative effort, when you are editing it’s better to ask your team, “what do you think about this?” And you put some pieces together. It is better to turn to the editor or the producer, and ask them how do they like something. Or how can we fix this? And you get a rhythm going with another mind, and when two minds create something together, it is better than only one.

N.G. How was your experience working with such a great actress like Meryl Streep?

Dan Labbato: I just asked her the question, and she said yes. As a matter of fact, I have learned that doing your own projects, you never know what you can get until you ask. So she was very good, very professional, she has worked with the biggest and the best, and Meryl Streep knows what has to be done. She is very unpretentious, a real person.

Dan Labbato: It was great to be in a community of people that all know all the process of making a documentary, They all recognize the issues of production and you can talk to people on the same level without explaining everything . I enjoyed the camaraderie; it was great being with my comrades. 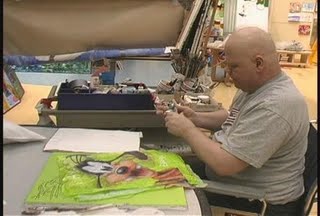 Dan Labbato: I am going to be in trouble if I say I liked it better that New York. (Laughing) I really like Montreal because I feel is the perfect sized, I don’t like big cities that much because people get lost, there is the feeling of anonymity, nobody pays attention to you, and you can be invisible. Some people like that, but I like smaller communities, people who are friendly to you; here we have what you call bedrooms communities. Nobody knows who is the neighbour and that is pretty much New York City. So I’d rather be in medium-sized cities, and although we hear people speaking different languages, Montreal is more cosy and European than New York.

N.G. What are your futures goals?

Dan Labbato: I will start teaching communications and media in the fall 2009 at SUNY- New Paltz, where I am developing more documentaries projects. I am also creating new classes for the change in communication and the digital media.