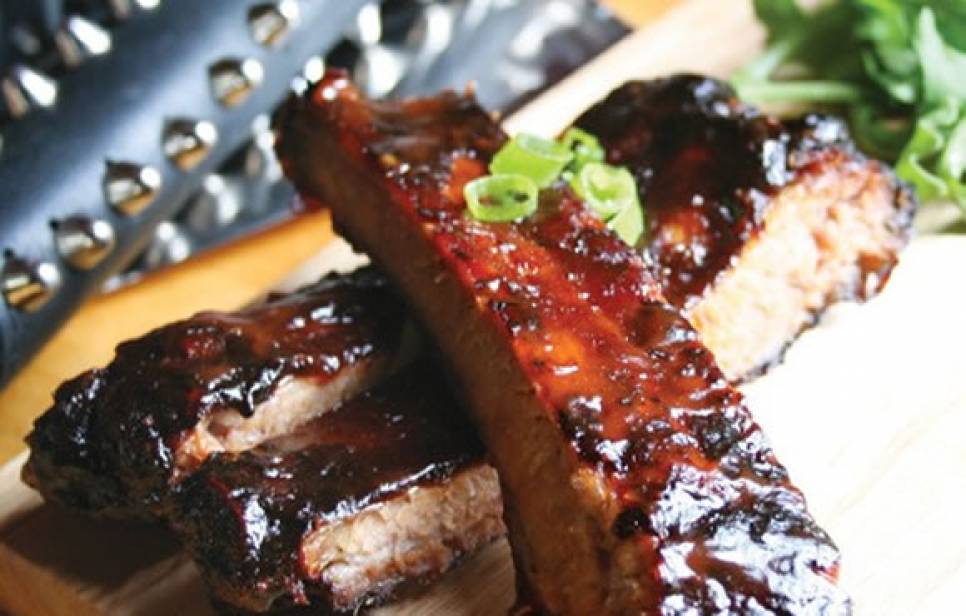 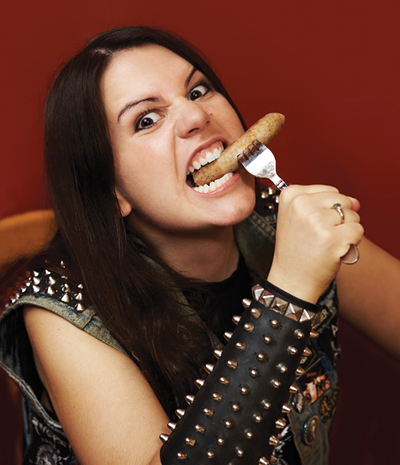 Annick Giroux agreed to meet with me at the McGill Metro. Not having met her before, we agreed to meet at telephone both inside the station. We ended up playing hide and seek as she was looking for me at one booth and I was looking for her at another booth. We finally got together and through this interview I discovered a talented young woman with many different attributes: a graphic designer, crazy about heavy metal, a great cook, a singer and a bass player.

It was a sunny day in downtown Montreal, just the perfect day to meet the author of Hellbent for Cooking, an original book that feeds voracious appetites with a varied menu of over a hundred recipes from thirty countries, along with basic recipes provided by heavy metal bands from around the planet. Annick the “morbid chef” introduced me to her world by sending me, the night before, a song from her band Cauchemar. I heard it and I liked it, yet I felt I was ready to meet a shy person, that doesn’t look at you while talking, full of piercings and tattoos, but she surprised me with her easy going ways and confident character. As soon as I saw her, I knew I was going to be more impressed than I had expected.

We walked a couple of blocks together before getting into a pleasant coffee shop. I started by asking about her song. She told me that she recorded it in Ottawa at a very particular studio, a friend’s basement who has very old equipment from the seventies. She started laughing and I got the opportunity to start asking more questions.

A taste for Metal.

Annick has always loved to cook, and her grandmother was her first teacher. For this reason her book is dedicated to her. In addition, she helped her mother whenever she had a special occasion, but it wasn’t until four years ago, when she got her own apartment, that she started reading and making recipes from all over the world. She says that as a matter of fact her first cake as a child didn’t turn out well but she kept on trying. She bought a large cook book and became a fan of international cooking.

NG. How did you come up with the idea of Hellbent for Cooking? 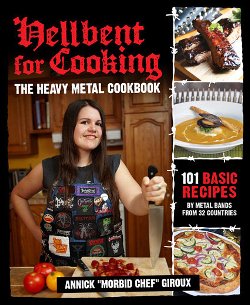 Annick: I am big fan of a metal bands and I love cooking. I went shopping one day and I was looking for cook books and for records and I thought that it would be fun to put them together because when I cook I listen to metal bands. I can’t cook without music and it is great! Sometimes I drink beer while cooking, especially when it is summer and it is very hot.

NG. You have hundred recipes, did you try them all?

Annick: Actually there are a couple of recipes that I didn’t try. One of them called for too much cheese and I just couldn’t eat it by myself since my boyfriend is lactose intolerant. But yes, I made most of them in my kitchen. Sometimes a friend came to help.

NG. What was the most difficult recipe to reproduce?

Annick: There are some of them that have difficult ingredients to find and looking for them took me a long time. I went to different markets downtown. To give you an example, the Mexican recipe “Mucbipollo” took longer, I had to find really specific ingredients, so it was hard to find them and the preparation was not easy either. Also, finding testicles for the Master’s Hammer (Bull Testicle Surprise) a dish from Czech Republic, was really, really hard.

NG. And, the easiest?

Annick: Well, I think the Fårikål which is Norwegian Lamb and Cabbage Stew, and that one is also my favorite. 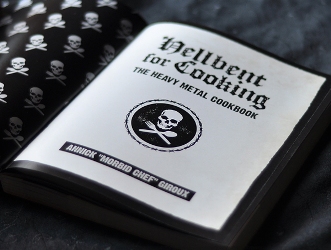 NG. I saw you use very special skulls for the page number.

Annick (She laughs). Well, you know, the skull with a fork and a knife usually means “poison”, but I just wanted to find a way to mix “metal” and food, so I came out with this idea and it is at the end of every single page of my book.

NG. I don’t know much about heavy metal guys, but they don’t seem to be addicted to healthy meals do they?

Annick: You can see metal is a life style that takes up a lot of energy, so in order to have energy we don’t have a choice, we need to eat good food. Of course some of us keep eating pizza, nachos and junk food, but most of us are like any one else. You’ll be surprised, but for example – when Metallica goes on tour they actually eat a very strict diet.

Annick: (She laughs louder). At the beginning it was a lot of beer (they weren’t nicknamed Alcoholica for no reason) but now they became older, so on tour they eat a diet of raw vegetables, sprouts and nuts only for maximum energy! At least, this is what I read.

NG. Well the menu is complete you didn’t miss any detail.

Annick: For me it is like when you are having somebody over, you need the entrees, the main dish, desserts and drinks. For me was very important to have a littler bit of each, you know… As a matter of fact it was quite difficult to get dessert recipes from metal bands but including a few of them added value to the book.

NG. Have they seen the book already? 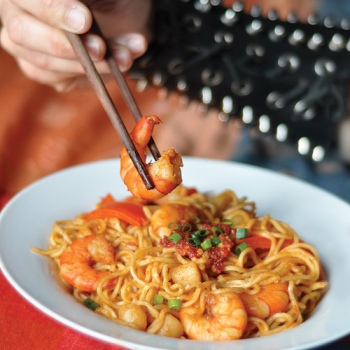 Annick: My publisher sent the book to the people who shared their recipes with me, yes. I obviously didn’t send some to everyone that I got in touch with though, because some of them told me that they don’t want anything to do with the project, others were very aggressive, saying: it is a crappy idea, you know… But most of them were quite excited about the idea. Some didn’t know how to cook though, so they couldn’t participate, but it was funny because a few asked their mothers to give them their favorite recipe.

NG. That sounds great tell more about it

Annick: One of them is Bobby Liebling from Pentagram, a band from the United States. He still lives at his Mom’s basement I believe… He is older, I would say 60 years old, but he doesn’t cook, so she makes all the food. Also I contacted Philomena Lynott, her son was the vocalist of a big band named Thin Lizzy, (Ireland), he passed away, and she kindly gave me his son’s favorite recipe called “Sunday Lamb Roast”. Besides that, Jamie from Midnight (US) gave me his mom’s meatloaf recipe.

NG. You also have a meal from Colombia, who helped you?

Annick: As I said, I am a big metal fan. I like to search metal songs all over the world, and I have a few Colombian friends who told me about a band from Medellin named Witchtrap. These guys gave me the Frijoles Borracho (Drunk Beans) recipe.

NG. It seems like you did a lot of research. Didn’t you?

Annick: Well it took me a few weeks to do research, I went to a metal encyclopedia (meta-archives.com) and checked every single band and then I checked the website contact information, sending around 400 emails. Most of them wrote me back, but you know as metal is a very macho environment, there were some big or famous bands that never got back to me.

NG. Weren’t you afraid to find some diabolic metal bands?

Annick: No – because I knew which bands were into what, so I wasn’t surprised. There are some metal bands that have satanic lyrics, some of them really believe in it, others use it as an image. In South America, Brazil for example, there were a lot of bands that took pictures in cemeteries and looked very, very, evil – wearing inverted crosses and bullet belts to shock people. Some of these band members are now completely different – one of them even became a university teacher! I personally like the music but I don’t believe in anything except life, I don’t follow any politics or religion. 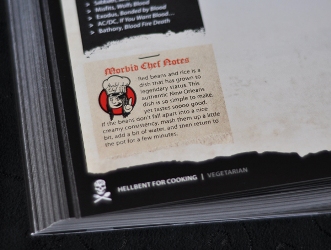 Through Annick’s book Hellbent for Cooking we get an idea of the challenges she faced in order to write her book. For those who like the movie Julie & Julia, let me tell you that I found another brave chef who researched and tried the recipes and dealt with frustrations while preparing her book. As Annick says sometimes she just has a bad day, and burns three pizzas: “I have really crappy equipment, I don’t have too much money to buy expensive stuff, so I tried each recipe at least once.”

However, the lack of a well equipped kitchen didn’t stop her from writing this fantastic book or preparing her favorite cocktail, Caipirinha a Brazilian drink. And if Julie Powell got inspired by a book written by Julia Child, Annick Giroux got her inspiration after producing and editing during six years the Morbid Tales underground metal fanzine. After this she became the “morbid chef”.

NG. How did you managed to publish your book? It is very tough to convince editors or to get published for the first time.

Annick: I was actually very lucky. It was the publisher who came to me directly. I didn’t reach out or anything. I had released some fanzines – and in my last issue I had featured a primitive version of Hellbent for Cooking, but with only 24 recipes. When Ian, the publisher ordered the magazine and saw my work he was like wow! He asked me: Can we work together? Can we release a real cookbook? We put a lot of energy into this. It took me around 6-8 months to make it but we put everything into it.

NG. Who did the cartoons for your book? 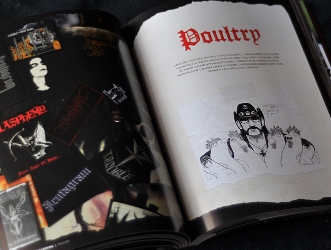 Annick : A friend of mine called Nagawika did the drawings. He is from France and is very funny. His drawings are really good because they carry the true metal spirit!

NG. How about the pictures of the plates? They look very provocative

Annick: I made the pictures of every dish I prepared! Some of them were taken by the bands though, like the Sadistik Exekution blueberry pie.

NG. And who made the picture for the cover of the book?

Annick: It’s Andy Ryan from New York City. The photo inside (the one with the sausage) was made because I had some leftovers… Ian, the publisher was there with his photographer, ready to take some pictures so I said: hey! let’s incorporate food into the photos but Andy said that when we eat we always look ridiculous, so I tried to look different – more angry, more aggressive!

NG. Finally, tell me how many people are allowed to help the Morbid Chef in her kitchen?

Annick: When I cook I am pretty open, I like to be helped! One friend helped me a lot, but my boyfriend did too. I don’t mind it until someone tells me “you should have done this or that” ; or if they start saying: “You can cook this faster this way” or “cut the onions that way”. When somebody is on top of me, bothering, all the time… well I just hate that! I want to yell: Just let me do it!

Hellbent for Cooking: The Heavy Metal Cookbook, by Annick Giroux

Confessions of a morbid chef